In early 2001, I interviewed Brad Smith, bass player for '90s rock band Blind Melon as well as the underappreciated, now long-defunct quartet Unified Theory, a quartet that released a stellar debut album in 2000.
Formed in Seattle, Unified Theory had an impressive pedigree, as it was comprised of 50 percent Blind Melon members (Smith and Christopher Thorn), as well as original Pearl Jam drummer Dave Krusen, along with singer Chris Shinn.
I was lucky enough to witness an electrifying Unified Theory gig at the Troubadour ... and then, like a comet, they disappeared. Still, it's very much worth your time to check out that self-titled Unified Theory album; it's a prime example of early 2000s modern rock. There are shades of Blind Melon, certainly, but there's also a sense of forward progress, with Smith and Thorn evolving the best aspects of their previous group into a soaring, psychedelic rocket ride. The groove, thunder and emotion of the last 3 tracks on the album especially ("Full Flavor," "Not Dead" and "Keep On") stick with me to this day. 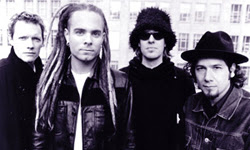 They’re In This Together

Unified Theory, featuring former members of Blind Melon and Pearl Jam, prove that rock — and their careers — are still alive on their self-titled debut

It was a shock, hearing that Blind Melon singer Shannon Hoon had died. His band’s self-titled debut album was the soundtrack of my life in late-1993 and beyond, a continuous presence on my car's tape deck. “No Rain,” Blind Melon’s biggest hit, while fine, wasn’t my favorite cut on the record. Rather, dreamy, melodic gems like “Soak the Sin” and dirty rockers like “Dear Ol’ Dad” had greater appeal. Listening to Hoon work his singular pipes with his talented mates was like hearing to Jane’s Addiction’s Perry Farrell — or perhaps Hoon’s cousin Axl Rose — fronting Lynyrd Skynyrd.

But Blind Melon, strangely cosmic and earthbound at the same time, provided far more than cool driving music. Like the best groups, they got under your skin and infiltrated your spirit. Though their second outing, 1995’s Soup, failed commercially and critically, and was followed by the 28-year-old Hoon’s untimely death by cocaine overdose that year, it was still an excellent effort — a soaring, often heartbreaking chronicle of a singer and a band hurtling helplessly toward an uncertain fate.

What does this have to do with Unified Theory? Well, along with boasting founding Pearl Jam drummer Dave Krusen (who recorded all the drums on Ten but was later replaced by Dave Abbruzzese) and singer/six-stringer Chris Shinn (formerly of L.A. band Celia Green), the band includes two ex-members of Blind Melon, guitarist Christopher Thorn and bassist Brad Smith. Thorn and Smith, the prime movers in Unified Theory, have done the impossible with their quartet’s eponymous debut: They’ve both continued and evolved the transcendent and layered rock sound of Blind Melon. In other words, this Theory has proven that rock is far from dead.

It helps Unified Theory’s case that the mighty-throated Shinn, at first listen, sounds like a dead ringer for Hoon (though further spins of the CD reveal him in possession of a vocal style different and more fluid than the late frontman). But certainly, this foursome isn’t just Blind Melon with a new guy at the mic — they’re a superb combo that, while encompassing the finer qualities of that prior band, rock-and-glide into lush new sonic territories on songs like “Instead of Running,” “The Sun Will Come,” and their latest single “Wither,” whose lyrics deal with watching someone suffer through drug addiction.

The Mississippi-born Smith, an easy-going guy as well as a great conversationalist, chatted via phone about Unified Theory (who play the Troubadour Feb. 28), Blind Melon and what it’s like working with a new voice.

Entertainment Today: What qualities were you and Christopher Thorn looking for in a singer?

Brad Smith: Somebody that was good [laughs]! You know, I don’t think we were looking for a particular sound per se. One guy that we wanted was a guy Blind Melon wanted to work with when Blind Melon was looking for a singer, and he had a baritone voice. Chris Shinn is a tenor, and Christopher (Thorn) and I have always leaned toward tenor voices, just because that’s what I identify with rock ’n’ roll — the Robert Plant range.

ET: What has the experience of working with Chris Shinn been like?

BS: We’ve had a great working relationship right from the beginning. We’re really lucky to have him, because he brings in a perspective that [Christopher and I] have never seen. When we were listening to like, fuckin’ Guns N’ Roses and bands like that in high school, he was listening to new wave stuff and the Cure. So he brings in that perspective. And he blows me away every night onstage. He really does. It took us a couple of months to get going and get our tour legs, if you will. And he started going for some stuff live that I never heard him do, and I think he even surprised himself — I mean the guy just rips. I wish we could go back and recut all the vocals, to tell you the truth. I feel like he’s improved probably 50 percent, just from touring.

ET: Was it intimidating for you to go in the studio and record with a new band after everything that happened with Blind Melon?

BS: No. After Shannon died, I produced and made local records in Seattle, and played as a session player on other people’s records. [The studio is] where I’m most comfortable in the world — I’m more intimidated pumping gas in my car, you know? Sure, there’s stress — sometimes writing songs can be painful, just because you’re not getting what you want. But there’s no intimidation really.

ET: The songs on the album flow together really well — they’re quite consistent. Was that a goal you were aiming for?

BS: I think it just kind of worked out that way, and maybe it was our mindframe, living in Seattle around the rain and gray skies all the time. I think that the record, [in my opinion], came out a little mellower than the band really is. We’re way more intense live, and we’re way more intense as people as well. But you’re right, the record has a certain kind of consistency, and I think it’s just a reflection of people getting to know each other and trying to be sensitive to the things that we’ve all individually been through.

ET: It seems like you guys could pull off a concept album — I mean, the band is named after an Einstein concept.

BS: Yeah, totally. We’ve kinda thought about that, and we have a lot of ideas for the next record. But I just don’t want to get too serious about the music and message. I don’t think we’re that serious a band, or maybe we are. We’ll just have to wait and see — I do know that we have 15 great songs ready for the next record. Our writing is going really, really well right now.

ET: How did it work out that it was only you and Christopher Thorn that ended up in Unified Theory, and no other members of Blind Melon?

BS: Rogers (Stevens, ex-BM guitarist) moved to New York City, and Christopher and I were living in Seattle. I think the fact that Christopher and I are both studioheads — gearheads — we stayed really close to the creative side of music, even after Shannon died. I think that’s what kept Christopher and I together. Glen (Graham, ex-BM drummer) moved to North Carolina, and I haven’t heard from him in four years. He’s one of those dudes — a recluse. And Rogers got into painting and this singer Rennie Lopez, and started a band with him.

I think it was better that we all split up, to tell you the truth. I mean, I really miss playing with Rogers, especially — he was my best friend growing up in Mississippi. But there was something weird about when all four of us got together the last time — there were a lot of skeletons hanging around, and a strange darkness about the whole situation after Shannon died. And I don’t know, I’m much happier as a person in this band.

ET: Someone once wrote that the reason Guns N’ Roses were so good was that they had five completely different personalities working together. Was that the case with Blind Melon?

BS: Oh, absolutely. When you got those four other whack-jobs in the same room together, it was almost like a social experiment — it was weird.

ET: That can make for great music, though.

BS: Yeah, and it did for us — I felt that Soup was probably one of the most eclectic and arty projects I’ve ever been involved it. That record is all over the place in terms of musicality and styles.

ET: Yeah, like “Skinned” — you don’t hear many songs featuring a kazoo anymore.

BS: No — Shannon was hell-bent on bringing back the kazoo, I guess.

ET: Would you say that the members of Unified Theory are a bit more on the same page?

BS: Personality-wise, I’m not sure. For some reason, I feel like this band — especially me, Christopher and Chris Shinn — we’re just really focused on writing music. I think there was a lot more distraction in Blind Melon. I feel a little more focused now, and it might be because I’m not smoking as much weed. I kinda went through that phase. I feel like I’m getting a lot done. I think the closest band you’re going to find to Blind Melon, in terms of openness and musical style, might even be Unified Theory, to tell you the truth. Christopher and I both came from that band and I think that [we’re] influenced by that music. We’re still influenced by it, just because it became so big and we had so many people listening when we played onstage every night. And that sticks with you — all that experience sticks with you and flows over to the next project.