E-Rock Archives: A Chat with Luke Steele of The Sleepy Jackson, circa 2006 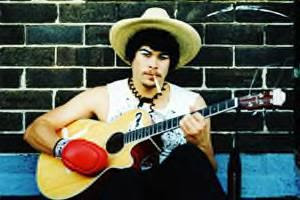 Waking up with Luke Steele, the musical mastermind of The Sleepy Jackson

It’s 7 a.m. on a Monday morning, so what better time to be talking to a guy who works under the moniker the Sleepy Jackson. Aussie rock visionary Luke Steele is wide awake, but then again he’s in a different time zone — New York City, where he’s enjoying a view of the Big Apple skyline while promoting his ambitious new effort "Personality – One Was a Spider, One Was a Bird."

As the album’s title suggests, Steele’s psyche is no stranger to conflict, and neither is his band. The Sleepy Jackson’s history is a troubled one, blighted by alcohol, drugs, and more fired musicians than Guns N’ Roses. But a new dawn is breaking for Steele and company, a real sense of starting over. With its wall-of-sound production, confessional lyrics and kaleidoscopic pop beauty, "Personality" is a bold statement, and to hear Steele tell it, he and his mates are on a mission. “We’re ready to rock,” he says without a trace of irony. “It’s really stepped up to a right sharp level now, it’s quite serious. It’s really make or break time for the band.”

The lush "Personality," which betrays Steele’s love of ’70s vinyl classics such as Carole King’s "Tapestry" and ELO’s "Time," is the successor to the Sleepy Jackson’s 2003 debut "Lovers", an acclaimed, genre-defying fantasia that impressed even the most jaded critics and music fans. And while the disc was a rush for the listener, Steele and his players found their own thrills on tour, where indulgences are unavoidable. “It’s a war,” he admits. “You’re up against a lot of big guns, like lust and temptation.”

Those crazy nights on the road are the polar opposite of Steele’s isolated hometown of Perth, Australia, which provided the ideal back-to-business environment for recording his latest song suite. “It’s quite calm at night, there are no cars on the road,” he says. “Perth can make you feel like a professor. You can feel like what you’re doing is real significant and definitive and special.”

If Perth sounds like a place frozen in time, that would seem to suit Steele just fine. Like many an artist, he was probably born in the wrong era. In fact, his father, a policeman, introduced him to music at an impossibly young age. “Apparently I was conceived a Tom Petty show,” Steele laughs.