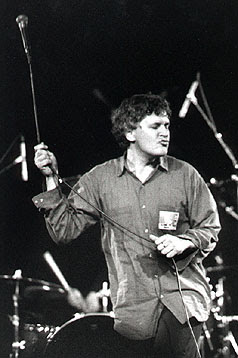 It's a fact of life – you have to overcome emotional barriers before you can move on. On Guided by Voices' last album, Isolation Drills, bandleader/indie rock poet laureate Bob Pollard, fresh from a failed marriage, relayed his inner turmoil with some of his most revealing and tender songs to date. Now that he's got that off his beer-soaked chest, it's time for this Dayton, Ohio-hailing troupe to return to what they do best: be America's top purveyors of immediate, completely alive rock 'n' roll.

Similarly, given the consistent quality of these 19 tracks, it's tough to single out highlights, but I submit the anthemic, staccato-riffing "Back to the Lake," the cascading "Storm Vibrations," the scrappy "Everywhere With Helicopter" and "Eureka Signs," a revved-up chunk of resplendence and grit.

For all their singularity, GBV isn't immune to betraying their influences. The folky "Factory of Raw Essentials" sounds like Pollard channeling Gordon Lightfoot, and "Wings of Thorn," with its percussive guitar strumming, could be sandwiched into every future pressing of the Who's Tommy and no one would notice. Nevertheless, as Cycles thrashes and jangles to a close, all that is great about this thing called rock seems gloriously distilled. Grade: A
Posted by E-Rockracy at 9:46 AM