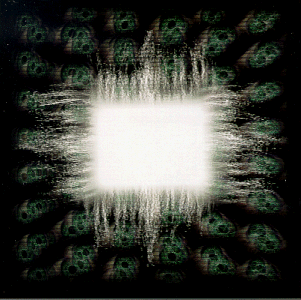 Tool
Ænima
Zoo Entertainment
"Some say the end is near," bodes vocalist Maynard James Keenan during the title cut from Aenima, Tool's long-awaited new effort. The song is a disgusted meditation on all of the world's dysfunction and apparently, Keenan feels that society needs to be purged entirely. Never one to bask even remotely in any type of ignorant optimism, he dwells rather in the murky recesses of the damaged human psyche, especially his own. With delicate whispers that gradually escalate into unsettling primal howls, Keenan traverses Tool's jagged soundscape like a psychotic charioteer. The band launches a multi-layered aural attack, fraught with shifting cadences and temperament. Aenima, the Los Angeles quartet's follow-up to 1993's incendiary Undertow, marks an upward artistic progression for a group thematically submerged in a self-imposed and downward emotional spiral.

Picking up where they left off on Undertow, Tool kicks things into overdrive with the opening track, "Stinkfist." With its familiar musical structure (crunching guitar riffs, airtight rhythms, Keenan's Jeckyll/Hyde croonings), it conveys the fearsome, visceral tone found in previous tunes like "Sober." One of Aenima's prime moments comes on "Eulogy," as Keenan's twisted, imposing vocals are seemingly funneled through a distorted bullhorn. Although the lyrics are completely unintelligible, they nevertheless retain an unnerving beauty. Tool has a penchant for such idiosyncratic details. The disc is full of soundbites (a relentless
tapping on a window, a baby crying) and creepy voice-overs (a German man fervently orating is especially disturbing) that render it a transportative yet dreadful experience. Tool doesn't compromise its art, and fearlessly marries darkly incongruent elements into a turbulent sonic netherworld where no one escapes unscathed.

Aenima is the perfect soundtrack for a mental breakdown. You may want to turn it off mid-disc (running time is 77 minutes, the single CD maximum), to regain a balanced state of mind. That is by no means an insult to Tool, but rather a genuflection to the devastating impact of their music. After a short break, you'll be compelled to turn it back on, eager to resume your harrowing journey into madness.
Posted by E-Rockracy at 9:21 AM