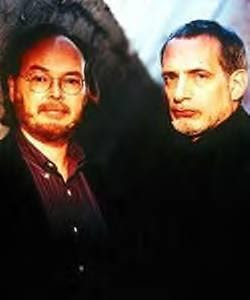 No static at all... That line from Steely Dan's hit FM, the finale of their fan-friendly, two-hour concert in Irvine, neatly sums up the carefree vibe of this night and the overall balmy texture of the band's deceptively dangerous, jazz-inflected pop-rock. Upon reflection, FM would really be the underlying theme of this laid-back summer tour/party, as both opener Michael McDonald -- a former member of this night's headliner as well as the Doobie Brothers -- have FM radio to thank for irrevocably imprinting their voices and classy music upon the gray matter of untold millions. Over and over again. For years. To this day, really, if you consider that recent payola paranoia has FM rock radio deejays eschewing any new music in favor of spinning familiar, impossibly worn-out tracks from 1970s acts like these guys.

It's hardly novel for dinosaur acts to trot out on the road in the summertime, sans any new material, and flog their classics for the money. But saying that this warm, humid Wednesday evening was nostalgia-for-the-money would be a disservice to curmudgeonly Steely principals Donald Fagen (a stiff yet affable presence) and the bespectacled Walter Becker (perched on a stool and not working too hard on this night). Their 18-song presentation was an exercise in one terrific, timeless song after another, and though the Dan have no new disc to promote (their last effort was 2003's coolly received Everything Must Go, a disappointment in comparison to their previous Grammy-winning comeback Two Against Nature), their repertoire is simply too classical to be written off as a live product being exploited cynically for cash.

Setting the festive mood with the swinging, propulsive rave-up "Bodhisattva," Fagen, Becker and their brassy 12-piece went on to serve up sharp, climactic renditions of tunes both familiar ("Hey Nineteen," "Josie") and obscure, such as "Time Out of Mind" and the shuffling Hollywood satire "Showbiz Kids" (the latter with McDonald, who sat in with his old Dan-mates for the last third of their set). "Dirty Work," one of their earliest ditties, was a deep cut surprise too.

Though attention to detail is crucial to do these songs justice, Fagen and Becker injected a loose feel to the set, with Fagen addressing the sweaty crowd humorously and Becker telling all they were a "great fucking audience" (thanks, Walt!). By the time they served up the first song of their encore, "My Old School," the entire venue had drank the Kool-Aid, and all were merrily singing that number's apocalyptic line "California... tumbles into the sea..." At that point, dropping into the Pacific seemed an acceptable fate, as long as FM radio waves could be received, with no static at all.

Soulful silver fox McDonald, whose deep, unchanging vocal chords must be encased in amber, christened the night with an enjoyable set of his solo material (Sweet Freedom), golden oldie covers like I Heard it Through the Grapevine and, most memorably, cherry-picks from his Doobie Brothers tenure such as What a Fool Believes and the inevitable, message-to-his-brother chronicle "Takin it to the Streets."
Posted by E-Rockracy at 12:38 PM